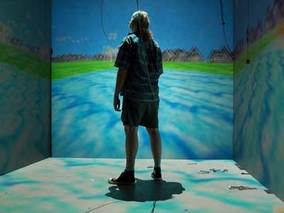 The first virtual reality device, the Sensorama, was built in 1960 by Morton Heilig. The Sensorama included a stereoscopic display, fans, odor emitters, stereo speakers, and a moving chair. Heilig also invented a head mounted television display that was designed to let a user watch television in 3D. Users were passive audiences for the films, but many of his concepts ended up finding their way into the virtual reality field.

Now most virtual reality systems are powered by normal personal computers. PCs are advanced enough to run and develop the software required to create virtual environments. Graphics can be handled by powerful graphics cards that are designed especially with video games in mind.

Virtual reality systems still have to display images to a user. A lot of systems use HMDs. HMDs are headsets that contain two monitors, one for each eye. This creates a stereoscopic effect that gives the illusion of depth. Early HMDs used CRT monitors, but despite providing good resolution and quality, were quite bulky. They were still used instead of LCD monitors, because even though LCD monitors were a lot cheaper, they couldn't compete with the quality of CRT displays. Now LCD displays have become much more advanced, and are a lot more common than CRT monitors. Other virtual reality systems don't use headsets. Some project images on walls, the floor, and the ceiling of a room. These are called Cave Automatic Virtual Environments (CAVE). Users are able to move around in a CAVE display, but they need to wear special glasses to complete the illusion. These environments provide a much wider field of view. It also allows a group to participate at the same time (although there are some limitations to this, like the display only be able to track one person's point of view, making everyone else passive observers).

Tracking the user is an important part of virtual reality, as the computer system uses that information to send the right images to the visual display. To track the user, most virtual reality systems require users to be tethered with cables to a processing unit. Unfortunately, this limits the range of motions available to the user.

Currently, input devices are also important to virtual reality systems. Input devices can be anything, including joysticks, tracking balls, controller wands, datagloves, voice recognition, motion trackers, and treadmills. As of now, there is no standard control system for virtual reality. Scientists and engineers that specialize in virtual reality are constantly exploring new ways to make user input as natural as possible to increase immersion. The video game industry has contributed many advancements in graphics and sound capabilities. One of the most useful recent advancements actually comes from the Nintendo Wii's wand controller. The controller is commercially available with some tracking capabilities. In addition, it's also affordable and appeals to people who don't normally play video games. Tracking and input devices are two areas that traditionally have fallen behind other virtual reality technologies, to the Wii controller could be the first of a new wave of technological advances to virtual reality systems.

There are programmers that envision the Internet developing into a three-dimensional virtual space, allowing users to navigate virtual landscapes to access entertainment and information. Web sites could appear as a three-dimensional location. Programmers have developed different computer languages and Web browsers to achieve this vision. These include:There are many virtual reality experts that argue that, without an HMD, Internet-based systems are not true virtual environments because they lack critical elements of immersion, mainly tracking and displaying images as life-sized.
​
Sources
http://electronics.howstuffworks.com/gadgets/other-gadgets/virtual-reality.htm
Page by Anastasia
More sources about getting started making VR:
Getting started with X3D -- http://www.web3d.org/x3d-vrml-most-widely-used-3d-formats
The Unreal Engine and VR -- https://www.unrealengine.com/vr-page
Powered by